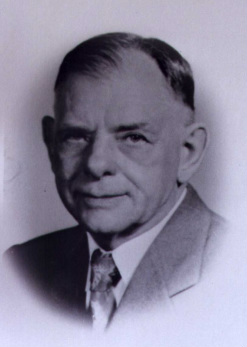 Dr. Richard Snowden was born to Sarah and Green Snowden on February 21, 1887 in the Patsy Community of Estill County.  He attended the Dripping Springs School near his home, a boarding school in Jackson, Berea College and the University of Louisville Medical School.  He taught school for a short time in the Patsy Area.

Dr. Snowden graduated from medical school in 1912 and began his medical career at Red Lick by renting room and board at the Sid Kelly place where his son, Hiram lives today. Much of his early practice consisted of home visits made on horseback in Estill, Owsley and Madison Counties.  He became acquainted with Hazel Bicknell, who was fourteen at the time, while living at Red Lick.  Following World War I in 1919, he and Hazel were married, They had two sons, Richard R. Snowden, Jr. of Ravenna and Hiram D. Snowden.

Dr. Snowden served in WWI as an Army Medical Officer in the mounted cavalry at camps in Kentucky, Georgia and North Carolina.  An Influenza epidemic raged through one of the camps taking many lives.  Dr. Snowden was a victim of the epidemic, which nearly cost him his own life.  He later served in the local National Guard and attended summer camp at Fort Knox for several years after the war.

Shortly after their marriage, Richard and Hazel bought a house on Elm Street in Ravenna.  He began to practice out of an office that he set up in what was later to be the living room.  He kept a horse in a shed out back because Irvine and Ravenna had no paved roads and reliable transportation was a necessity for the doctor.  He later moved his office to space over the Ravenna Bank, which is now a paint store.

A doctor’s patients were seen more often in the home that in the office during the early years of his practice.  This was extremely time consuming because of the poor road conditions,   A call to very inaccessible areas such as Wolfe County meant that he would be gone into the wee hours of the morning.  Hiram recalls a time when his father was called to Patsy for a patient with a broken leg.  Hiram accompanied his father on the call and they had to go to Crystal on the Beattyville Road, climb the mountain and walk to Patsy carrying boxes of plaster of Paris, a long metal splint, rolls of gauze and his father’s medical bag.  Needless to say, it was a most exhausting and lengthy medical visit.

His son Richard, Jr. remembers that his father gained the reputation as being one of the better baby doctors in the central Kentucky area, especially in the treatment of childhood diseases.  Today, Dr. Snowden would be known as a pediatrician as well as a general practitioner.

Dr. Snowden served the Louisville and Nashville Railroad as one of its first doctors in the Ravenna area.  Railroad accidents were common occurrences.  When the roundhouse whistle would blow the family would know that soon their father would be called to meet a crew bringing injured or sometimes dead workers to the Ravenna depot.

Doctors often assisted each other in Dr. Snowden’s day and he worked occasionally with Dr. Tracy Wallace who was the father of Dr. Virginia Wallace Lewis. He also worked with Dr. O. F. Hume, a surgeon who operated the Riverview Hospital.  That facility later became a hotel.  Dr John Patterson now owns the building and operates his medical practice there.

Illnesses most feared and talked about in the 1930’s and 40’s were typhoid, diphtheria, tuberculosis and rabies.  Mental illness seemed to be the most perplexing to Dr. Snowden.  He felt that there were just not adequate facilities, counseling or other treatments for this condition while there was a lot of depression and ailments that he recognized as mental illnesses.

In 1934, Dr. Snowden left private practice and went into the Public Health Service.  He served as the health officer in Estill County as well as Clark and Madison Counties.  He was instrumental in influencing officials to construct new health facilities for the Estill and Madison County Health Departments. He retired from the Public Health Service in the late 1960’s with over 30 years of service.  He returned to private practice in his home and served on the local Board of Health for several years.  He never actually, retired, he just sort of wound down.  People still came to his home for their prescriptions and ailments.  He worked with patients many times by just taking with them about their illness.  He didn’t keep records concerning who owed him fees and many times he was paid with fresh pork or other foodstuff.

In addition to medicine, Dr. Snowden owned a farm on Red Lick.  He had considerable knowledge of the Estill County oil fields and often served as a consultant for the oil interests in the area. He was always optimistic that someone would find rich oil deposits in Estill County.  He was interested in many things including a fascination with the exploration of the moon.

Dr. Snowden was a Kentucky Colonel, charter member of the O.D. Henderson Masonic Lodge, and a longtime member of the Ravenna Christian Church. He died on June 4, 1982 in Irvine at the age of 95.