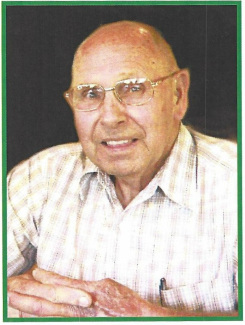 Edison Joe Estes, a son of Daniel and Sarah Jane McKinney Estes was born on June 2nd, 1939 near Ravenna, KY in a modest home located near where the American Legion is located at today. Joe was the 9th child in a family of 6 boys and 4 girls. The only children surviving are two of Joe’s sister’s, Etta Willis, Irvine and Verda Chamberlain, Hamilton, Ohio.

When Joe was almost four years old in 1943, the family moved to a farm on Red Lick Road. Joe started school at the one-room Parks School on Red Lick where there were eight grades in one room. He had to repeat the second grade because his teacher was drafted into the Army. Joe’s years of attending Parks made a lasting impression on Joe and in later years brought about a profound respect for the teachers and the one-room school system.

After two and one half years Joe transferred to the Waco Elementary School when the family moved to a farm there. Joe always said it was a terrifying experience for him because the school was so big and he got lost all the time. His solution was, “to find someone I thought was in my class and follow them”. A year later the family moved back to West Irvine where Joe attended the old West Irvine School on KY 52 until it burned on Christmas Eve of 1950. Until the school was rebuilt on its present site Joe and the other children were bussed to the County High School. Joe completed the eighth grade at the new West Irvine School and attended the Estill County High School.

In August of 1956, when Joe was seventeen and Sonja was 15, they married and moved to Hamilton, Ohio where Joe was working at the time. Two sons, Dennis Joe and David Odell, were born while they live in Hamilton, but after years, they decided Estill County was where they wanted to live, work and raised their family.

In October of 1960, the family came back to West Irvine and in the spring of 1961 Joe began working at Lisle’s Economy Shop (where the ECHGS is now located). During the thirteen years he worked there Joe delivered bottled gas or worked on appliances in just about every home in Estill County. While there he was also fortunate enough to be able to attend schools and training classes on the repair of large household appliances which enabled him to become a Master Technician in several fields of appliances repair.

In December of 1962 another son, Willis Ray, was born and in 1964 Walter Scott was born completing the family of four sons. Joe always encouraged his sons to do their best in whatever their interests were through life. Whatever they were involved in he was always standing behind them. He taught them to always look ahead and to learn from their mistakes. His philosophy was, “mistakes are going to happen, let’s just hope we learn something from them.”

From 1974 to 1994, Joe and Sonja operated their own business, “Joe Estes Appliance service.” Joe was in his element, doing work he enjoyed and being able to visit and talk with different people every day. What Joe enjoyed talking about first and foremost was his family, county history and genealogy, however, he was a gifted conversationalist and just plain enjoyed talking.

While working for the Economy Shop, he began to collect pictures of all things Estill County. He devised a method of copying pictures in our home and always returned the originals to their owners. After the school system merged he became more interested in the history of Estill County schools and primarily the one and two room rural schools. His intention was to publish a book about the schools prior to the consolidation of the city and county. Before this could happen, he began to face some major health problems and was forced to retire from his work in 1994.

We had joined the ECHGS in 1991 and in the next few years, as his health stabilized, Joe became more involved in the activities of the society. During the spring of 1998 Joe worked with the book committee collecting material and photos for the first hardback book to be published by the ECHGS entitled, “Memorial To The Veterans of WWII From Estill County, KY” The book was ready for sale in the summer of 1999 and was a huge success.

Shortly after this, Joe worked with the building committee to help locate a permanent home for the society. When it was learned the former Black Brother’s Bus Station and Chat “N” Nibble Café located at 133-135 Broadway was for sale (also formerly Lisle Economy Shop), Joe worked with others to obtain funding through the Kentucky Transportation Department and Kentucky Heritage Council in order for the society to purchase the building. Today the ECHGS has one of the nicest research libraries in the State thanks to people like Joe who have worked diligently for its betterment.

In 2001, Joe began the job of alphabetizing and cataloging all the school pictures in his collection for the purpose of publishing his long awaited book about the schools. Joe’s health began to fail again and the book was once more put on hold. During this time, Joe had decided that he would do the book with Sonja’s help and all the materials and proceeds would be given to the historical society. As soon as his health improved he and Sonja went to work and the 627 page, “School of Estill County Kentucky” was published in 2003. Joe always said he wanted the School Book to be the legacy he left to the county.

For years the historical society had collected pictures from many sources to be used in the publication of a pictorial history of Estill County. In 2008, Joe and Wayne Horn began the job of compiling the pictures and identifications and putting them on CDs. In between problems with his health, Joe worked at the computer for months laying out the draft of the book. In February of 2009, “200 Years in Pictures, Estill County, Kentucky” was published. When it was finally completed, Joe remarked, “This is the last book I will ever work on”.

Joe was an excellent orchardist and taught himself the art of grafting and budding fruit trees. He had done orchard of many varieties of fruit and nut trees totaling around 250 trees. On many occasions the U.K. Horticulture dept. conducted community pruning and grafting classes at the orchard. Joe was always eager to share what he had learned in helping and teaching others.

Joe served on a committee with Tom Bonny to help raise awareness of the plight of a one-room school known as Granny Richardson Springs, an Estill County School that was donated to Eastern University by the Sparks Family in 1976. The school is located on the Eastern campus and was in dire need of renovation. Through benefits, contributions and a grant the school has been completely renovated and a rededication ceremony was held in November of 2008. Joe was proud to have had a small part in this endeavor.

Joe lived a Christian life having been saved and baptized as a young man. He attended the South Irvine Christian Church. He was a member of Irvine Masonic Lodge#137, Scottish Rite, and Eastern Star.

Joe served on many committees over the years and worked in many different capacities, always for the benefit of the community or to help his fellow man. Joe loved Estill County and its people and always said, “I want to treat everyone like I would want to be treated”.

The true legacy that Joe leaves behind is his wife of 52 years, Sonja; sons: Dennis; David (Diana); Willis (Rebecca); Walter(Lisa); 11 grandchildren, 19 great- grandchildren, and the family of Glenn Marcum. Glenn came into our lives as a friend of our sons while a young teen and became as another son to us.

As Joe’s family, we are proud that Joe was chosen to be inducted into Estill County Hall of Honor. We believe the love he has expressed and the service he has given to his beloved Estill County and Its People more than qualifies him for this honor.