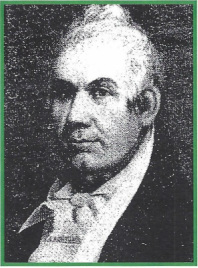 One of the most influential men in Kentucky during the time when the state was admitted to the Union in 1792 was General Green Clay of Madison County. He was born in Powhatton County, Virginia on August 14, 1757, died October 31, 1826 in Madison County, KY.  Green Clay was married to Sally Lewis, daughter of Eliza and Thomas Lewis. This Union had three sons, Sidney Payne, Brutus J., and Cassius M. Clay and three daughters, Betsy, Sally Ann, and Sophia. Cassius served as ambassador to Russia during the Civil War and was an outspoken and anti-slavery advocate. However his father Gen. Green Clay was the largest slave owner in the state.

Green Clay arrived in Kentucky in the fall of 1780. His services as a surveyor were much in demand due to many overlapping land claims that resulted from the inaccurate maps that existed at that time. As a surveyor he received half of all the land that he surveyed or located. In 1794 he owned one-fourth of all the land in the county and continued to be the largest landowner in  the nineteenth century with over 40,000 acres.

In addition to being a skilled and ruthless entrepreneur, Green Clay was also a politician. He served in the Virginia Legislature and alter Kentucky became a state, he served in both the House and Senate of Kentucky Legislature. He was named Speaker of the Senate in 1795 (a title no longer in common usage).

Clay was a powerful and influential man by the time the War of 1812 began. He was commissioned as a Major General by Isaac Shelby, Kentucky's first governor, and ordered to form a regiment of Kentucky Militia to defend the western frontier from the British and Indians.

Although Green Clay's main residence and other business interest was in Madison County he owned several tracts of land and business interests in Estill County. He was one of the first to own the Estill Springs Resort and erected some of the first cabins on the property. He also conveyed 20 and Yi. acres of land to the Estill County Justice of the Peace after a discharge of the bond given by Thomas Todd and Bennett Clark for the purpose of laying off and establishing a town, now called Irvine in 1812.

His other holdings in Estill County were: a ferry, taverns, part owner of the Red River Iron Works, even the Station Camp Christian Church, and various property and land holdings scattered throughout the county.

Green Clay is perhaps best remembered today as the owner of the Clay's Ferry in Madison County and as the father of Cassius Marcellus Clay of White Hall. He did a great deal more and was a powerful force in shaping the early structure of Kentucky. General Clay introduced many of the industries that drove the Estill  County economy during the first century of its existence.  General Green Clay left his imprint on Estill County as no other has done.