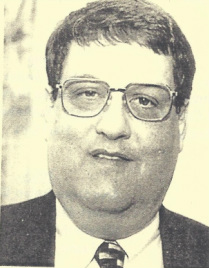 When Guy Hatfield moved to Ravenna in 1958 with his family, the little town became much livelier. Guy was in Jim Cochran’s class, a bright, inquisitive stranger form Gary, Indiana, who enjoyed chasing Chesteen and Jane on the playground, running up to the store by the Wigwam during lunch and endless hours of baseball with his buddies, J.D. Blaine and Phillip.

During elementary days, Guy’s most enjoyable times were spent with Troop 144 of the Boy Scouts of America.  He was an Eagle Scout under the leadership of Charlie Vanhuss and was chosen for the honor of Order of the Arrow. He was chief of Kawida Lodge and began a life-long hobby of collecting patches.

His parents, Guy II and Lucy Baker Hatfield, had built a home on Main Street in Irvine, so Guy entered Irvine High School in 1964.  He played baseball and football for the Eagles and studied journalism with Leslie Jones, a friend and mentor who, after her retirement would proofread the CV&T.

At Eastern Kentucky University, Guy majored in political science.  He was a charter member of Sigma Alpha Epsilon Fraternity, President of the Student Body and a student member of the EKU Board of Regents.  Friends remember his major consumption of ‘Ale 8’ and ‘gold fish’ while in college. During this time Guy became very active in the Kentucky Yong Republicans Organization, ultimately serving as its President.

After college graduation, Guy saw opportunity for a local newspaper and started the Citizen Voice in 1973.  A few years later he bought out the competing paper and merged the two into the Estill County Citizen Voice and Times.  The paper was frequently honored for its journalistic excellence by the Kentucky Press Association.  Later, Guy expanded his newspaper holding to include the Clay City Times and the Flemingsburg Gazette.

Guy was an active member and three-time President of the Kentucky Weekly Newspaper Association. He was also the President of the Kentucky Press Association and served on its board for many years. He received the Russ Metz award from KPA for being its most valuable member.  He received the Excellence in Entrepreneurship Award from the EKU College of Business and Technology. Guy’s most prestigious honor was his induction into the Kentucky Journalism Hall of Fame.

Guy’s life was not without struggles.  His first great sorrow came with the sudden death of his wife, Sherry Witt Hatfield. He was defeated as the Republican candidate for Estill County Judge Executive.  His battle with diabetes involved not only frequent hospital visits but also amputation of both legs.  He learned to walk with a prosthesis, still maintaining close communication with his newspapers.  Even when confined to a wheelchair, Guy managed a busy schedule with the help of his second wife Teresa Wright Hatfield and his children, Traci, Tina Enz and John.

Guy left a legacy of excellence and service.  He helped charter Troop 89, BSA, Irvine United Methodist Church and served on the Board of Directors for the Center for Rural Development in Somerset.  He was a past President of the Irvine –Ravenna Kiwanis Club, a member of the Powell County Lions Club, a member of the Oleika Shrine Temple, and a Kentucky Colonel.