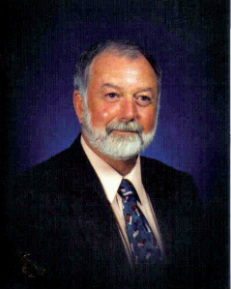 James, son of Harvey and Henriella Thomas was born and raised in Estill County. He was married to Phyllis Arvin Thomas for 43 years and had one daughter, Jamie Thomas Day, son-in-law, Douglas Lee Day and two grandsons that he adored, Jantzen Thomas Day and Kordel Lee Day. James graduated from Eastern Kentucky University with a Bachelor’s degree in math and science and continued his education in acquiring a Master’s Degree and Rank I.  He spent his life dedicated to the betterment of his family, church, community and the youth of Estill County.

James was a man of strong faith and commitment. He loved his family and was dedicated to them. He worked hard each day to provide for and protect them. James was a member and chairman of the trustees at the Irvine First Baptist Church where he led the restoration to improve the beautification of the church. He was also strongly committed to working the land of Estill County. He farmed with his father as a young boy and continued the tradition the rest of his life. He loved raising cattle, growing crops and especially sharing his garden bounty with others.

He impacted the lives of young Estill Countians in many positive ways. No matter what he needed or had to do, he always had time and love for these young people. In 1984, he had a dream of beginning a program that would change the way Estill County athletics was viewed across the state of Kentucky. He used his own equipment, his own time, and much of his own money to establish a “Winning Tradition” for girls’ softball. He was also instrumental in the building of the first Estill County High School softball field, “JL Thomas Field”. With his encouragement, leadership and vision, the softball program quickly became the schools most successful athletic program. During the 17 years that he served as head coach, he amassed over 500 wins, ten district championship titles, two regional championship titles and a KHSAA State Runner-Up title in 1985 which made him the winningest coach and the only coach to achieve a State Runner-Up Title in any team sport at Estill County High School. James taught his players to give 110% in everything, including valuing their education. Many of his former players are now coaches, teachers, doctors, principals, nurses, lawyers or have some type of college degree. He was truly proud when the girls achieved success in softball, school and any other part of their life.

James continued to reach young people through sports by volunteering to coach Kiwanis Little League Baseball for 6 years. In addition, he built a baseball field on his farm and a building with a batting cage for the youth to practice. These facilities are still being used by the Kiwanis Youth Baseball and Softball teams and the Estill Middle School Baseball team. Through coaching, teaching, counseling, church work and opening his home and farm, he touched many lives. James was a positive role model and truly cared about all of his family, friends and the youth that he coached and taught.

He was an advocate for all youth sports and envisioned the development of the local park. He served on the Parks and Recreation Board that strived for a new park for Estill County.

James loved and was proud of Estill County. He touched many hearts and souls…he was a man whose love for those he knew could not be held within the boundaries of the fields he coached upon.