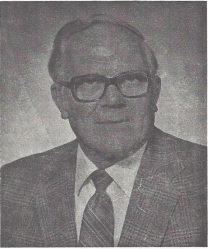 Joseph Maurice King was born to Bert Price and Marie Arvin King on August 15, 1925, in West Irvine, Estill County, Kentucky.  After graduation form Estill County High School, he served in the U.S. Navy as an aviation electronics technician for November 18, 1943 until May 20, 1945 with a tour of duty in South America.  Upon his honorable discharge from the Navy, Maurice enrolled at Transylvania College in Lexington. He was member of Phi Kappa Tau and received a B.S. Degree with a major in mathematics and a minor in Physics in 1949.

Maurice began his employment with the Lexington Bluegrass Army Depot as a radio repairer in 1950. In early 1956 he was assigned to the newly formed nucleonic organization of the depot at Avon.  With the advent of Nuclear power, the safety of workers was a primary concern with the government.  Maurice was very instrumental in developing methods, tools and skills to meet the rapidly expanding ionizing radiation dosimetry and RADIAC calibration workload.  In late 1957, he assumed supervisory responsibilities for the dosimetry program.  As Chief of the United States Army Ionizing Radiation Dosimetry Center, his role was expanded in 1962 to include management of the entire U.S. Army Dosimetry Center Program, the Nucleonic Primary Reference Laboratory, as well as the Nucleonic Calibration Function.  His guidance was a key element in the maturation of these projects from their infancy.  Largely, through Maurice’s exemplary efforts, the nucleonic function enjoyed an excellent reputation throughout the Army in matters dealing with ionizing radiation. His efforts helped ensure that the critical issues of radiation safety in the Army were properly addressed.  As a nuclear health physicist, Maurice was involved in the detection and measurement of ionizing radiation for the United States. On March 13, 1986, Building 139, the Ionizing Radiation Dosimetry Center Building at Lexington Bluegrass Army Depot was dedicated in his memory.

As a nuclear health physicist, Maurice traveled extensively in this country and Canada. He worked in the U.S. Capitol several times to calibrate radiation detection instruments.  In the late 70’s, he went to Enewetok in the Marshall islands to measure radiation levels and found radiation in the coconut milk, requiring the local people to leave the island until the situation could be remedied. He traveled to Three Mile Island and underground test sites in Nevada with the Bluegrass health Physics Society.  Form 1982-1984, he was assigned to Redstone Arsenal in Alabama.  His daughter, Nada said, “We didn’t realize how important our father’s work was because it was so top secret, he couldn’t even discuss it with his family, or sometimes even let them know where he was located.”

Maurice enjoyed bowling with his wife, Jeanette, in his spare time.  He also liked to work on televisions and did some of the first repair and installations in Irvine.  During the time that Jeanette operated the fabric store on River Drive, Maurice helped out with sewing machine repairs. “He really liked the new ones“, commented Jeanette.  “He was excited about seeing how the new features worked.” Maurice was known for his dry wit and thought his wife told very funny stories.

Maurice was a lifelong resident of Irvine, a member of the Ravenna Untied Methodist Church. He died on January 24, 1985.  He is survived by his wife, Jeanette Bonny King, and three children: Vinada Witt (Nada), Joseph M. II (Joey), Gene Scott and their respective families.