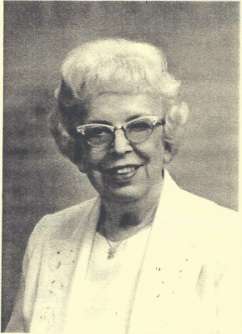 Leslie Jones was born in Lincoln County, Kentucky.  She was a graduate of the University of Kentucky and earned a Masters Degree from Eastern Kentucky University.  She was very active in the community and was a member of the Irvine Ravenna Woman’s Club, the Estill County Garden Club, the Four Seasons Garden Club, Daughters of the American Revolution and the Retired Teachers Association.

Leslie Jones loved her job. In fact, she loved it so much that when she was forced to retire at the age of 70, she commented, “The cavalry caught up with me. I’m not retiring by choice. It’s a Kentucky law and I’ll just have to abide by it. I don’t care much for it”.

What Miss Jones did care for was the hundreds of students whose lives she touched during a 48 years teaching career.  From 1938 until 1971, she taught at Irvine High School and then served as principal at Irvine Graded School from 1971 until 1986.

Some of the students that Leslie worked with moved on to greatness, particularly in the field of journalism.  One of her former students, Earl Cox, became a syndicated sports columnist. “She changed lives”, Cox commented.  He credited his journalism career to the teacher. “She got me interested in this racket. If it weren’t for Leslie…we’d both be digging ditches.  We were poor as church mice.” Cox was speaking of his friend William Neikirk, who was also influenced by Leslie to enter a journalism career.  Neikirk moved on to become a Washington correspondent for the Chicago Tribune, where he covered the White House and was nominated for the Pulitzer Prize.  When Neikirk’s scholarship fell through, it was Leslie who saw to it that he had jobs and a place at the University Of Kentucky. He credited her with his decision to go to college.  “She probably meant more to me than any teacher I’ve ever had.”

Leslie helped students outside the classroom as well as within.  She found jobs for them or gave them jobs herself to let them earn money for a variety of needs.  Girls at school knew they could go to Leslie to discuss their problems.  Earl Cox recalled, “She was a teacher, counselor, athletic department treasurer and bookkeeper. She did everything.” She taught a variety of classes including home economics, Latin history and journalism.

Her students remembered her as a no-nonsense, determined, demanding, optimistic, do –your-best kind of person.  She expected a lot from her students, recalled Marjorie Tudor Bradford. “She knew we were going to do well. She had faith in us and helped us along the way. She pushed us.”

Former CV&T publisher and owner Guy Hatfield III also benefited from Leslie Jones’s teaching. “I got my enjoyment of word meanings and sentence structure from Latin I and II and my love of history from her classes,“ Guy recalled.  “She set high standards and was tough on discipline and that carried through in other areas,” he said.

“I don’t know how she did it, but she had the unique quality of making everyone feel like they belonged to her,” said Rhoda Higginbotham, a retired music teacher and Leslie’s lifelong friend and caregiver.  “Every year, she picked out one student she thought she could help.”

When Miss Jones passed away in 1995, Rhoda was asked to play the Irvine High School fight song at the funeral.  At first Rhonda hesitated, “but the minute I started it, “she said, “everyone stood up and began singing, like a salute to her.”

During the funeral, former students and fellow teachers packed the funeral home.  They shared stories of how Miss Jones had helped them.  While she had no relatives in Estill County, her students felt like her children.