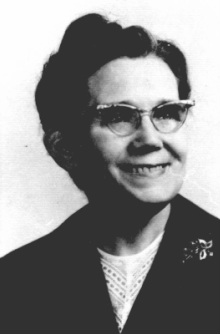 Maggie Wolfinbarger was born on August 19, 1902 in Wagersville, Kentucky to P.A. and Susan Elizabeth Parrett Wofinbarger. When Maggie was four years old, her parents moved to Irvine where her father was employed as a carpenter for the Estill County Board of Education. He erected eight one-room school buildings in eight districts in the county.  When Maggie was about five, she and her older sister and brothers were enrolled in the Irvine Grade School where Betty White was her teacher.  Miss White taught her students to read form a chart and Maggie remembered being told she began to “reach out” or try to progress to the next grade levels.  By the time she was nine years old, she was ready for the seventh grade.

The family moved to South Irvine on the Kidwell farm when Maggie was nine and she enrolled in the Wisemantown School District.  She had to ford Station Camp Creek to get to Wisemantown and on at least one occasion was invited to spend the night with the Miller children. The Miller family owned and operated a general store in Wisemantown.  They lived in the house where Tom Bonny, their great-grandson, lives today.  While staying with the Miller children, Maggie was impressed when the mother, Flora Scott Miller, prayed before sending the children to school.  It was the first time that Maggie had ever heard a woman pray.  “She prayed at the dining room table, calling all of us children in to pray with her before we went to school.  I never forgot it during my lifetime.  To this day it influences me.  I feel that this woman’s praying is why I am a Christian and a Methodist today and why I possess the character I have.  I have prayed all during my life, for every big decision and every new task.  I have always asked God to direct my life in every aspect.”

After completing school, Maggie was appointed Postmaster of the Ravenna Post Office and held that position for 14 years. However, she felt a calling to be a missionary and took the teacher‘s examination in order to work with children.  She worked for one year at the Oakdale School in Breathitt County.  She decided during that year that teaching was too strenuous and not what she wanted in life.  While walking to school one morning she felt an “unseen person” walking with her.  When she arrived at school and checked her mail, she found a letter from the sheriff of Estill County, C.T. Williams, asking her to come and work in the sheriff’s office.

After four years in the sheriff’s office, Maggie went to Business College for two years and was subsequently elected to the position of Estill County Court Clerk.  She held this office for six terms (24 years) form 1942 until 1966. “I prayed as I was appointed and prayed each morning before I opened the office to serve the people of Estill County.”  When asked if there were any other women that held elected office during that period of time, she said that there was only the school superintendent, Mamie Scott, as far as she remembered.

Maggie said that she was elected to the clerk’s position six times because of three primary reasons.  First, she prayed daily, second, she was honest and finally, she always tried to treat everyone with fairness.  She said that she rode to work with everyone form the garbage man to the mayor.  The biggest difference between the position today and then, she said, is the salary, which was $5,000.00 per year at the time she served.

Maggie cared for her invalid mother for several years and later lived with Mrs. Elizabeth Witt.  Maggie summarized her life by saying, “In every walk of life I prayed and God has guided me day by day.  Down to 97 years of life, I have trusted our Savior, who has never failed me.”