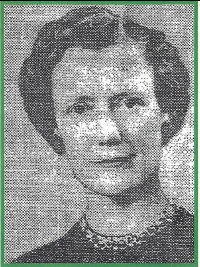 Dimple Heather was the adopted daughter of William and Mary Heather. Her biological mother had died and her father, a Mr. Richards, from Columbia, Kentucky, was a brick layer. Mr. Richards tried taking care of Dimple and younger sister, Elsie, by taking them with him on jobs. He had dropped Dimple off at a residence in Irvine, Kentucky to stay until he could pick her up. The Heather's son, Clyde, begged his parents to adopt her, and they gladly did so. Mrs. Heather felt like the Lord was watching out for her because Clyde died a few years later at the age of 26.

Dimple grew up in Irvine and attended the Irvine City Schools and later graduated from Estill County High School. She was an excellent student and was fond of basketball and other sports.

Dimple taught in several one-room  schools in Estill County.  Two of the schools that she served were Chestnut Stand and Upper White Oak. Mamie West Scott, the Superintendent of the Estill County Schools at the time, asked her to develop an experimental program in a one-room school. Dimple helped children develop basic concepts and skills through practical activities in nutrition, health, economics and citizenship. Dimple's demonstration school was one of the first in rural Kentucky. She also taught for a period of time at Estill County High School.

When she showed some interest in becoming a missionary, a friend encouraged Dimple to do so. In 1950, at the Irvine Christian Church, her home church, Dimple was ordained as a missionary. She entered language school in Costa Rica for a year. After language school, she went to Aguascalientes, Mexico as a "living link" missionary of the Irvine First Christian Church in the Morelos Community Center. She came home to Irvine to visit the church and to provide a report several times during her ministry. At the Center in Aguascalientes, she taught adult education classes and supervised playground activities for children. She also taught English, arts and crafts and directed many Christian conferences and camps.

In 1967, Dimple returned to the states in search of relief for advancing arthritis. She was able to travel back to Mexico alone but could not continue her work there as a missionary. She therefore returned to Louisville, Kentucky. She kept in contact with her friends in Mexico by letters, cards, church bulletins, and through visitors.

Dimple Heather ended her service to God on earth in 1969 at the age of 73.