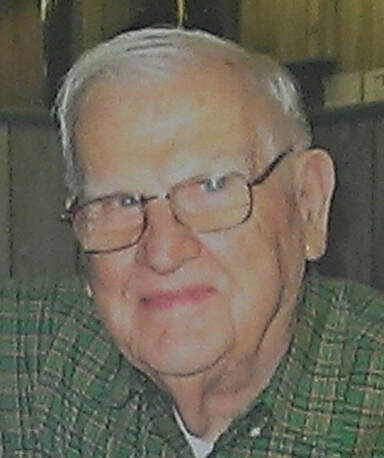 ​Paul Tuttle was the owner and operator of Kentucky Farm Bureau Insurance for more than 60 years.  Tuttle was the first agent in the county for Farm Bureau which he started in 1949, shortly after returning from serving in the United States Army during World War II.  He was wounded when the ship on which he was sailing to South Africa was sunk by enemy fire, but due to a loss of records never received the Purple Heart he deserved.

Tuttle had the honor of dining with President Franklin Dr. Roosevelt and President Harry S. Truman (while Truman was Vice President).  He was recruited by Robert Kennedy to run his presidential campaign in Kentucky, but he declined, telling Kennedy, “I am not a politician.”

Tuttle attended Hoys Fork and Thomas Schools.  During his teen years he helped his father survey in Estill and surrounding counties.  He married the former Daisy Winkler in 1944, and he had two sons, Michael and John Paul.  Paul was very active at Crooked Creek Christian Church, where he served as an elder for 50 years.

The ladies at the Estill County Farm Bureau office recall Mr. Tuttle fondly, recalling memories of his generosity and his humor, regularly keeping the mood around the office light with his endless supply of funny stories.

Paul Tuttle was by all accounts a fine businessman, but he was an even finer person – a worthy representative of all for which the Estill County Hall of Honor was established.