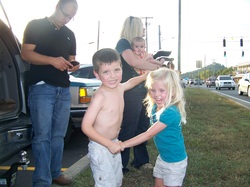 History
"Cruising" has been a favorite past-time of young folks for many years in Irvine and Ravenna.  River Drive is the state highway (KY-52) that runs from downtown Irvine through downtown Ravenna.  Folks would drive through town with the music turned up, searching for friends or just hanging out in a parking lot and watching traffic to see who was riding around with who.  As time progressed, gasoline prices soared and cell phones became commonplace.  Cruising town had become a thing of the past.  In the summer of 2012, a handful of local women (several of them moms) came up with the idea to organize an official night to cruise town just like in the "old days."  With that, Revive River Drive was born.  No one knew what to expect that first year.  Flyers were printed and passed out, and a page was established on Facebook.  The response was phenomenal.  These young ladies had struck a chord with many folks who had spent quite a few nights on River Drive themselves.  The first event was a success by all accounts.

In 2013, RRD2 was received with even more fanfare.  Building on the success of the first year, it was decided to hold the event at the same time, the Saturday of Labor Day weekend.  This way, everyone can plan on either staying home in Estill County to cruise or returning home if they now live elsewhere.  Even with the danger of severe weather looming on the horizon, the event grew leaps and bounds.  Traffic was literally a parade from one end of the strip to the other.  Live music was performed at the Ravenna Veterans Memorial Park.  A local radio station did a live remote from the center of the action.  It was evident that Revive River Drive was here to stay.

This brings us to 2014 and beyond.  The founders partnered up with the Estill County Chamber of Commerce to help cover all of the responsibilities that need to be covered to ensure RRD is an even bigger success and continues to be a great event.