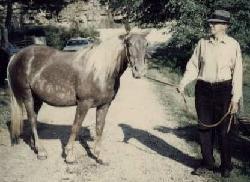 Samuel O. Tuttle was born on January 12, 1902 in Estill County, the son of the late Joseph and Olivia Jane Curtis Tuttle, also of Estill County.  Sam graduated from Berea High School where he participated in many activities and went on to graduate from the University of Kentucky with a B.S.Degree in agriculture. He played on the football team, the track team, and the wrestling team. While sporting events were a great large part of his activities Sam’s true love was always horses.  Sam Tuttle is credited with creating the Rocky Mountain Horse breed.  A breed prized for its characteristic 4-count gait and gentle but determined demeanor.

His love of animals developed early while growing up on a farm here in Estill County.  Sam traveled to school in Berea via horseback and was a great lover of nature and animals in general.  It is said that Sam could break a horse bareback using nothing but a length of twine, or as he called it, “string” used as a makeshift bit.  The most famous of Sam’s Rocky Mountain Horses was OLD TOBE.  Sam held the trail riding concession at Natural Bridge in Slade, Kentucky for many years and OLD TOBE was a favorite trail horse.  OLD TOBE is credited with breeding over 5 generations of horses and being a very reliable stud horse.  Sam Tuttle kept a sizable herd of thirty to forty horses on his farm even during the Depression and World War II.  He would also loan out mares to other local farms that were bred to his stallions. Sam is considered by many to be most responsible for the survival of the breed.

When Sam wasn’t farming he taught at Irvine High School and later Estill County High School, retiring with 30 years of service. He was active in other community organizations such as the 4-H Council, the Farm Bureau, and the Southern Sates Advisory Board. Sam was a charter member and  a long time president of the Estill County Fair Board and was also the chairman of the county’s Democratic Party for several years.  Sam and his wife, Laura Harvey Riddell Tuttle (also a member of the Hall of Honor) lived for many years in Spout Springs.  They had two children, a daughter, Laura Louise and a son, Joe.  His surviving family is with us here today, his daughter-in-law Judy Tuttle and granddaughter Alice Collins.  Sam died in August of 1988 and is buried in West Irvine.  His contributions to the equine world and the world of Estill County are greatly appreciated.