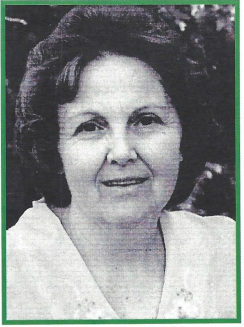 Sharon Garrett Niece was born on May 5, 1948 to Elmer and Christine Duncil Garrett in Whitesburg, Kentucky. However, after her natural father, Elmer died when Sharon was only 15 months old, her mother married Charles Caudill, the man that Sharon and her brother Gary Wayne Garrett would know as "dad". After her mother's death a few years ago, her dad married Ruth Brown who Sharon now affectionately calls her "wonderful step-mother".

Sharon grew up in Whitesburg amid a large extended family. She learned early in her life to value close ties with her relatives and her church family at Whitesburg First Baptist Church. She was a good student at  Whitesburg  High  School  and  aspired to become a teacher.  She graduated from Eastern Kentucky University in 1970. She and her husband, Hoover Darrel, who incidentally was her high school sweetheart, came  to  the  Estill  County  Schools in the fall of  1970.  Sharon  taught  mathematics and Hoover taught physical education and  driver education. Hoover also became the head football coach at Estill County High School where he was extremely successful, even to the point of the Board of Education naming the football field, "Hoover Niece Field".

Sharon loves children. In her math classes she nurtured her children in every aspect of their lives, both academically and personally. She also worried when students could not grasp some difficult concept and was challenged to find an easier way to explain so they would "see" how to solve those problems . She served as the team "mother" for all the seasons of Engineer football. Often she drove young men home, and sometimes even to her own home for a meal and a bed. Her deep affection and concern for "at-risk" students has led Sharon to several opportunities to work with children including Dropout Prevention, Middle to High School transition, Summer Jumpstart, Estill  County  Alternative  School, and now, after retirement in 2001, in the Youth Investment Project serving "at-risk" students in Estill and Powell Counties. Sharon has also been a faithful friend to her colleague and friend Debbie Cox, who has lost her sight due to diabetes. She has worked with and for Alcoholics Anonymous and continues to work with Mrs. Elizabeth Witt's Christmas Party. "If you see a child in need or a family in distress, just call Sharon Niece," says Steve Garrett, former math teacher and principal of Estill County High School. Her neighbor and friend Scottie Noland says, "All she has to do is to hear about a child in trouble, and she wants to see if the child can be helped." Today, Sharon works closely with Cow Creek Baptist Church. Fellow church member, Randy Sutter says, "She is always there, greeting new people and old members, pitching in behind the scenes and keeping church projects going. She's a rock we all depend on."

When she has a break from her many activities, Sharon loves to read,  quilt, and walk. However, her favorite activity is being with her sons and their wives, Jeremy and Sheila, Andar and Jenny, and Stanley and Nicole, and especially helping care for her grandchildren, Austyn Hoover, Trevyn Blake, Ty Michael, Jax Darrel, and Luke Aiden of whom she brags, "They are my only trophies". Sharon Niece exemplifies love for others and humility. She asks for no recognition for any service that she has performed . Shejust helps because "it's the right thing" and "what God wants."