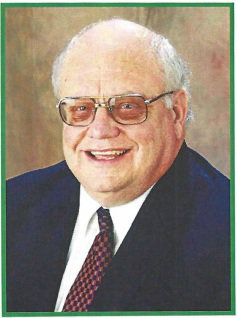 There's probably not a single person in Estill County who doesn't know Tom Bonny. Over his many years in working with the school children of Estill County he has served as a Teacher, Band Director, Assistant High School Principal, Middle School Principal, K- 12 Instructional Supervisor, Assessment Coordinator, and retired as the Superintendent of the Estill County School system. These jobs alone should qualify him for the Hall of Honor, but it is Tom Bonny the man and servant to his community that makes him most worthy for this honor.

Most everyone knew Tom's parents. Tom Bonny, Sr. came to Estill County from Madison County where he was the first music major from Eastern Kentucky University. His father was a Methodist circuit rider and to this day the roots in the Methodist faith run deep in Tom and his wife Francine. His mother was Virginia Witt Bonny, the daughter of Victor and Anna Witt. Most all of Tom's life was spent right in Wisemantown where he now lives. With his sisterJune Carol Williams, a retired Scott County music educator, the family was heavily involved in the Wisemantown  community and particularly the Wisemantown  United Methodist Church.Just like his father, Tom's rich, bass voice leads a wonderful music service at the church each Sunday. The only period of time that Tom and June were away from Wisemantown  was when their father was beginning a band program at Athens School, the forerunner of today's Bryan Station High School. The family moved back here to take over the Witt store and ran this operation for many years in addition to his father's work as an educator in the Irvine School system.

Tom's many  accomplishments in the field of education are noteworthy, but it is talking to his former students that gives you a feel for what a fine person he was and still is today. All his students and teachers praise "Mr. Bonny" for being a great person as well as a great teacher. Most relate that these two talents merged into one made his classes enjoyable and provided a role model that all respected.

Tom, along with three to four other members, could be addressed as "Mr. Kiwanis." Everyone knows the value of the Irvine-Ravenna Kiwanis Club to the community, especially to its youth. Tom has held almost every leadership post in the organization, including Lt. Governor for this region.

Other community highlights include terms as chairperson of operating boards at the Estill County Library, Marcum and Wallace Hospital,and most recently Pattie A. Clay Hospital. He was also one of the original founding board members of the Estill Development Alliance. Without his work this organization and the Hall of Honor would not even exist.

Maybe, just as important, Tom loves the earth, and the beauty of God's work in this county. Growing up he always helped in the garden and with the help ofhis aunt, where he and Francine now reside, he became interested in her greenhouse and starting plants for his garden and the gardens of other friends and neighbors. This passion began in 1986 and it may have been prompted by his marriage to Francine in 1985. His time spent courtin' could now be put to good use and Francine is an excellent gardening partner and does all the food preservation. Everyone knows Tom enjoys a good meal from the garden. All who pass by his home and garden know that it is beauty to behold.

Tom and Francine had one special daughter, Tara, who resided with them, enriched their lives, and filled their heart with joy from 1988 until May 31, 2007. Tara suffered from an unknown genetic anomaly, but like Tom and Francine she touched the lives of all the people she met. "Tara's Kitchen" at Wisemantown United Methodist Church has propelled the church forward with further building renovations, property expansion, youth outreach, and the beginning of an outdoor recreation and picnic pavilion.

Very few people have touched as many Estill County lives as Tom and Francine Bonny. In the field of education Tom felt that kids were the most important part and his legacy is that he loved each one of them and wanted the best in life for all Estill County children. The saying "There is a destiny that makes men brothers, none goes his way alone, and all that you put into the lives of others comes back into your own", certainly applies to Tom Bonny. Following the words of this saying has brought much into his life and made him a rich man indeed.