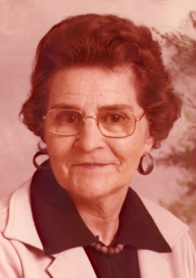 Virginia Yeager was born on December 2, 1913 in northwestern Estill County in a log cabin on what has come to be known as Vashon Farm. Her parents were Owen and Mary Tuttle Patrick.  Virginia had three brothers and one sister.  One of the boys died as a child. Virginia’s father was a teacher and her mother operated a family store. In addition to running the store, her mother served as postmistress for the community of Kimbrell.

Virginia began her formal education in a one-room school going to and from school with her father.  The family later moved to Main Street in Irvine when Virginia was 7 years old.  She was allowed to enter the third grade at Irvine Graded School following an oral interrogation.  The interrogation was given when Virginia told the teachers that she belonged in the third grade.

The following spring Virginia’s father, while working for the L&N Railroad between school terms, lost his life in an accident.  Dr. Richard Snowden rode a special train with Mr. Patrick to the Richmond Hospital where he later died.

Virginia attended Irvine Graded School, Estill County High School and a private school in Winchester.  By the time Virginia graduated from the private school in 1931, she had completed enough coursework at Eastern Kentucky State Teacher’s College to qualify for a teacher’s certificate.  She obtained a trustee’s signature for teaching in a one-room school at Kimbrell.  However, there was a problem.  Teachers had to be eighteen years old and Virginia was only seventeen.  Her mother’s father, a politician, asked Superintendent Ralph Tyree to attempt to secure an emergency certificate from the Kentucky Department of Education.  By the time she was eighteen, she had only a month left to finish her first year of teaching.

In addition to teaching one year at Kimbrell, Virginia taught two years at the Witt School, which was located across the road from the new Estill County Middle School.  She continued her education at Eastern Kentucky University during the second semesters while the public schools were not in session.

In 1934 when Mamie West Scott took office as superintendent for the 2nd time, she hired Virginia as a clerk for the Estill County Board of Education.  Virginia also, at the encouragement of Mrs. Scott tutored children whose birth dates were too late for them to enter school in September.  She remained in this position until her marriage to Joseph Bennett Yeager, the boy next door.

Virginia and Joe had four children, Thomas Bennett, Joseph Patrick, Mary Anne and Owen Franklin.  Following the birth of her first two children, Mrs. Scott asked Virginia to finish the school year filling in for a math teacher at Estill County High School who resigned in November.  The following year she went to work at the Richmond Depot and did not return to teaching until after the birth of her two younger children.  However, she did continue to tutor in her home.

Although she did not accept a regular teaching position until her children were in school, Virginia taught several semesters as needed in the Ravenna, Irvine and Estill County Schools.  She served as the attendance clerk for the Irvine Schools in an emergency for several months.  In 1951, she was employed by the Irvine City School System as a math teacher.  She taught in the Irvine Schools for 20 years and retired form the Estill County Schools in June of 1977.

Tragedy entered Virginia’s life once again when her second son, Joe Pat, who was 22, lost his life in an automobile accident as he was leaving the military base at Fort Bragg, North Carolina.  The therapy of teaching helped her through this very difficult time of her life.

Virginia has served on the Evaluation Committee for the National Council of Teachers of Mathematics, was awarded stipends on three occasions while attending Eastern Kentucky University.  Two of the stipends were from the National Science Foundation and the other from the National Congress of Parents and Teachers.  She received the Centennial Award for Excellence in Teaching at the Centennial Year observance at Eastern Kentucky University in 1974.  She has held office in the Parish Council of the St. Elizabeth Church, Estill County Garden Club, The Marcum-Wallace Memorial Hospital Auxiliary, the Estill County retired Teachers Association, the Kentucky Retired Teachers Association and is a charter member and former officer of PI Chapter of Delta Kappa Gamma Teacher’s Society.  She is a Kentucky Colonel.

Mrs. Yeager states, “I am truly happy that I chose teaching as my profession and think of how the lives of others have engraved their message on me.  God has been good to me.  We learn to live with our heartaches, though we never forget.  My family and friends are my life.”