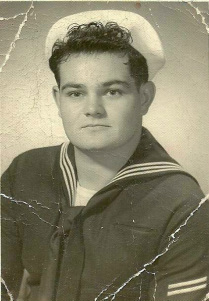 William “Bud” Spicer was born July 22, 1931 in Irvine, Estill County, Kentucky to Chester A. Spicer, Sr. and Brucie Flynn Spicer. They lived in Irvine until Bud was five years old. Then, because of the Great Depression, the family moved to the family farm in neighboring Lee County (Willow Shoals). Bud and his older sister Gloria Faye attended a one-room school taught by a Mrs. White, who rode a horse 5 miles each way and was by all accounts an excellent teacher.

In 1938, the depression began to ease up and the family moved back to Ravenna.  By this time there were two more additions to the family, Chester, Jr. and Wanda Ruth. While the family lived in Ravenna, Bud and Wanda Ruth attended Ravenna Elementary School, and Bud recounts great memories of outstanding teachers such as Miss Cochran and Miss Renfro.

After his 6th grade year in Ravenna, the family moved to 617 Cantrill Street in Irvine and Bud attended Irvine Elementary School – again remembering excellent teachers and a great education.  After graduating from Irvine Elementary, he attended Irvine High School, from which Bud recalls many fine memories and teachers such as Mr. Joe Ohr, Miss Eunice Winn, Miss May Curtiss, Miss Long, Miss Scheckler, Mr. Lorenzen and many others. While at Irvine High, Bud played football and baseball, earning 5 high school letters in football and 4 letters in baseball.

Upon graduating from high school, Bud entered the University of Kentucky on a football scholarship, recruited by Vince Dooley and playing for Coach Paul “Bear” Bryant. Bud fondly refers to the highlight of his football career as playing in the Cotton Bowl on New Year’s Day, 1952 as a true Freshman, which was a rare occurrence. UK All-American and future pro player Bob Gain once told Bud, “Spicer, for a little man, you sure can hit!” He also played baseball for UK under the coaching of Harry Lancaster and assistant Coach Abe Shannon, earning 3 UK letters.  Bud’s college education at UK was interrupted by the Korean War, which broke out in June of 1950 and continued until 1953.

While at a very young age (15), Bud joined the National Guard (Company H 149th Infantry). Not being able to attend drill in the guards, his name was submitted to the draft board, and rather than be drafted, he joined the Navy and spent 2 years, 6 months in Korea.  Upon discharge from the Navy, Bud returned to UK and finished his eligibility in football, playing under Coach Blanton Collier.

Bud married Helen Tuttle in 1957 and worked for Sylvania for 3-4 years. He then completed his degree and received his teaching certificate and applied for the coaching job at Irvine High School and was accepted.  As a teacher and coach, he wanted to get each student and athlete to be all they could be. Bud stated, “I believe that I was successful in getting many young people to accept this challenge because I see a lot of the students and athletes I worked with that are outstanding people today.”

After leaving Irvine High School, Bud went to work for the UK Cooperative Extension Service for 30 years. He is now retired and lives with his wife Helen on a 30 acre farm in Adair County.  They have 2 children, 3 grandchildren, and 3 great grandchildren.