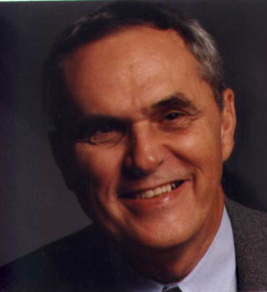 “Bill Bob” Neikirk is the Chief Washington correspondent and senior writer for the Chicago Tribune. He was born in Irvine, Kentucky on January 6, 1938 to Louis Byron and Elizabeth Green Neikirk.  He is married to Ruth Ann Clary Neikirk, a teacher and Transylvania College graduate.  They have three children, Greg, John and Christa.

Bill Bob’s father worked for the L&N Railroad during some very difficult economic times and his mother worked as the mother of twelve children.  There were ten boys and two girls.  The family felt the sting of poverty, yet struggled through, as so may did during those times.  His father died when he was 13, leaving six children still at home.  It was a traumatic time for the family, but his mother, who completed the third grade, was masterful at raising her children and holding everything together. Many friends in Irvine also assisted the family.  While his father’s death was very traumatic to Bill Bob and his siblings, it probably contributed to their ability to be self-sufficient and develop a great work ethic.

His family was an important factor in Bill Bob’s success in life.  His sister Dorothy helped him learn to read before he entered school and his brothers encouraged him to excel in sports even though he feels that they were much better than he was.

He also attributes much of his professional success to his mentor and high school journalism teacher, Leslie Jones. In his senior year when he was agonizing over his ability to attend college, Miss Jones went to his house and told him that she had arranged for him to go to UK.  With the help of others at UK he held down three jobs which included firing a furnace and serving as a busboy in a downtown cafeteria.  He also had a part-time job in the Lexington Herald Sports Department thanks to Earl Cox who worked there and who was also from Irvine.  The cafeteria job was extremely important as that is where he met Ruth, who would later become his wife.

He fondly remembers his many outstanding teachers at Irvine High School.  One of those was Joe Ohr who taught an obscure class called economics.  Bill Bob says that he learned so many basics from that course and it was extremely important to him when he started writing about economics in 1970.  However, his journalistic beginnings started when he was in the 7th and 8th grades.  There he wrote stories about playground basketball games and posted them on the bulletin board.  He covered his first high school basketball game for the Herald in 1956.  It was the University of Kentucky’s laboratory school, University High. Adolph Rupp’s son, Herky was on the team. Bill Bob recalls that as he took a seat at a table reserved for the press, even though he was the only press there, he turned around and right behind him was Coach Rupp and his wife.  He said that it was like seeing God to a young reporter.

Bill Bob says that because journalism can take a person so many places it is difficult to single out the most memorable event that he covered.  However, some of the most impressionable are Happy Chandler’s defeat in 1963 by Ned Breathitt, a civil rights march in Louisiana in 1969, the trial covering the murder of three civil rights workers in Mississippi, the 1968 Democratic convention, the antiwar marches in Washington, Henry Kissinger’s announcement of the U.S. withdrawal from Vietnam,  Yasser Arafat’s headquarters in Beirut guarded  by 15 year old kids carrying submachine guns, the  courage of Anwar Sadat in Egypt, the despair of the Shah of Iran just before the revolution, the realization that the ordinary Chinese people did not hate Americans while covering the opening up of China in Beijing in 1978, and the tears he shed when he saw the worst of the slums in Haiti, the WWII Veterans visiting the Normandy Cemetery where their friends were buried.  Bill Bob also recalls the task of presenting Pete Maravich with his first AP all-American certificate while he was in charge of the Baton Rouge AP bureau  and more recently, covering the impeachment of President Clinton.

Bill Bob was employed by the Chicago Tribune in 1974 and continues to work for them today.  With the Tribune, he has served as economics correspondent, White House correspondent, assistant managing editor for financial news in Chicago, senior writer and Chief Washington correspondent.  He has received numerous journalistic award including winner of the Loeb, John Hancock , University of Missouri and Champion Media Business Writing Awards, runner up  for the Pulitzer Prize; the Merriman Smith Award for presidential coverage; runner up in the Raymond Clapper and Nover Awards; and named as one of the top 100 financial journalists of the 20th century.  He was elected in to the Kentucky Journalism Hall of Fame in 1998. He is a member of the Gridiron Club and the National Press Club.  He has authored two books, Work Revolution (1980) and Volcher, Portrait of a Money Man (1987).

William Robert Neikirk has demonstrated extraordinary success in national and world journalism circles, but he retains his love for his family school and hometown.  He expresses with pride his appreciation for all of the people of Irvine and Estill County who have been so important in his extraordinary achievements.  He states,”My greatest wish would be that my mom and dad were still living and could attend the (hall of Honor) ceremony on April 20th.”