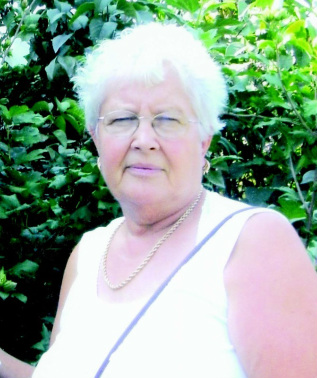 Wilma McIntosh Wise is a lifelong resident of Estill County.  She was the eight of nine children born to Floyd and Mary Profitt McIntosh who were married in 1924.  She spent a happy childhood in the Tipton Ridge/Furnace Junction area where her father was the owner of a grocery store.  “It helped to feed all those kids,” Wilma likes to joke.  She started elementary school at Gum Spring School and quickly became a favorite of her teacher, Ms. Clayberta Powell Gamble.  Wilma was an excellent student who made straight As but was frequently told she talked too much.  In the eighth grade she came to town and started middle school at Estill County Schools.  Before she graduated Wilma left school to marry her childhood sweetheart, Wayne Wise in 1965.  She and Wayne have two children, a daughter, Tammy Cole and a son, Terry Wise.  Wilma is a proud grandmother to three grandchildren and two great-grandchildren

Wilma decided to finish her schooling and worked toward getting her GED which she accomplished in 1972.  In 1973 she started her tenure at Comp Care.  Wilma was mentored and trained by Pat Alexander and Esther Meade who took her under their wings and helped establish her in her position at Comp Care.  Wilma’s time with Comp Care is why she was nominated for the Hall of Honor.  She spent 27 years assisting Estill county citizens with intellectual and developmental disabilities. At one time she was in charge of over 30 different bank accounts, making sure that each client knew how much money was available to each of them.  Wilma, Pat Alexander and Esther Meade were responsible for starting the first daily treatment program for Estill Countians with intellectual and developmental disabilities.  “We were told our responsibility was to keep our clients out of the hospital, so that’s what we did.”, said Wilma.  She made sure that each client had decent living conditions, access to the proper mental and physical healthcare.  She drove clients to doctor’s appointments and supervised a team of Occupational Therapy students from Eastern Kentucky University.  Wilma’s philosophy for her career of service to others was simple but true; be truthful, open and honest with people and you can do a world of good for them.

As well as being a champion for the often overlooked mentally challenge members of our society Wilma was on several boards.  She served on both the Head Start Advisory Board and the MepCo Home Health Board for over 20 years.  She served on the Kentucky River Foothills board in its early days as well. Wilma, along with Ralph McClanahan, Dr. Ross Brown, Mike Rogers and Tom Whitaker worked extremely hard to start an ambulance service in the county and were the founding members of the Ambulance Board that developed into our first class EMS team that Estill County is privileged to have today. She served on the Ambulance Board for over 10 years.  She also served on the Interagency Board for 5 years.

After retiring from Comp Care in 2000, Wilma went to work with her husband, Wayne, at their furniture store, Wise Place, on Cow Creek until 2010.  She now enjoys gardening, cooking and reading.  She also loves to sew and is known for making beautiful pillows for others after a death in the family.  Wilma is a member of the Irvine Free Methodist Church and loves to work puzzles at the Food Court three days a week with a group of friends nicknamed the “Dixie Bell Gang”.  Most of all Wilma wants to stress to others who might have quit school before graduation to seek out opportunities to get their GED.  “You can’t give up on you or your education, declared Wilma; you can make the world better if you don’t give up.”